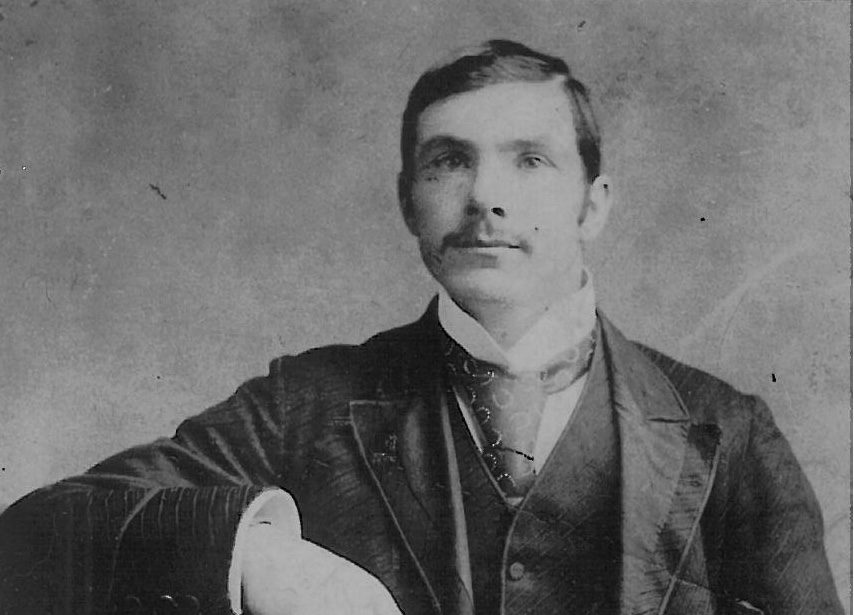 We were recently visited by the family of John Jones aged 30 who came originally from Shropshire, and was killed in the 1901 explosion at the Universal Colliery. John, his wife Alice and their three children Florence, Jack and Fred lived at 15 Kingsley Place, Senghenydd. A fourth child, Alice was born after he was killed. The family then returned to their family in Shropshire.

His present descendants, grand-daughter Audrey, great grand-daughter Jane and great great-grandson Dougie, age 15 who all still live in the Shrewsbury area were pleased to look at the details of the 1901 disaster as well as looking at his house in Kingsley Place, which, apart from double glazing and a bright new front door are the same as all those years ago. They also visited the Welsh National and Universal Mining memorial Garden and saw the Plaque dedicated to John. They were aware of the difficulties and hardship that Alice had bringing up her children and were proud of their family’s achievements. They kindly gave us a photo of John which is now in display in the Museum. In return they kindly let us take of photo of them!

Thanks to players of the National Lottery who allow the Heritage Fund to give grants, we were grateful to receive £8,300 from the Heritage Emergency Fund for PPE, garden repairs and Marketing.
www.heritagefund.org.uk

Postcode Neighbourhood Trust is a grant-giving charity funded entirely by players of People’s Postcode Lottery.
Our organisation received £19,514 from the Trust to Enable us to reopen safely after Covid Closure & Marketing to help promote us.
www.postcodeneighbourhoodtrust.org.uk
www.postcodelottery.co.uk

Winter Opening
1st October – 29th February 9:00am – 5:00pm
(Closed on Christmas Day)
Summer Opening
1st March – 30th September 9:00am – 5:00pm
Last entry 15 minutes before close.
During inclement weather, please check our Facebook page to check that the Memorial Garden is open. The safety of our volunteers and visitors is important to us, and we will only open the garden everyone can get there safely.

Since re-opening after lockdown we are now governed by strict covid-safe measures. We currently only accept visitors on an appointment only basis. All members of the party must belong to the same extended household.

Please email bookings@abervalleyheritage.co.uk to book your visit.
Tuesday to Saturday
11:00am – 2:00pm
(excluding the Saturdays preceding Bank Holidays)
Last entry 15 minutes before close.
Admission is free of charge to everyone.

During inclement weather, please call Senghenydd Community Centre on 029 2083 0445 to check that the Museum is open prior to travelling. The safety of our volunteers and visitors is important to us, and we will only open the museum when everyone can get there safely.