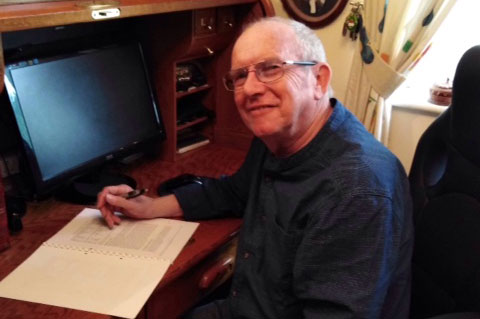 Heritage was recently contacted by a gentleman who explained that he was the last man in the Universal Colliery in Senghenydd.  Intrigued by this message we immediately contacted him – it was Mr Phil Morgan who told us a fascinating story.  As the NCB’s “Colliery Ventilation” man located at Oakdale Colliery he was sent to the Windsor Colliery on an important safety issue.  As the Windsor was to be closed and its seams mined from the new Nantgarw Colliery he had to ensure that no highly inflammable methane gas could travel through the shafts to Nantgarw.  The main problem were the “Bumping Beams” situated at the bottom of the Senghenydd Shaft, which had already been filled in earlier.  Should these beams give way any trapped methane gas would could get through to Nantgarw!  It was his responsibility to make sure that this didn’t happen.  Only then could he finally close and lock the steel doors that had already been erected.

Phil has been in close contact with the Coal Authority and has obtained maps of all underground works from Universal – to Windsor – to Nantgarw.  He explains it all with expertise and humour.

Phil and his wife will be attending the Memorial Service on Monday 14th October and afterwards joining us for light refreshments in the Community Centre.  He will have all the maps and other info with him and is prepared to show and explain over a cup of tea how it all occurred.

Please do join us on Monday 14th October.

Thanks to players of the National Lottery who allow the Heritage Fund to give grants, we were grateful to receive £8,300 from the Heritage Emergency Fund for PPE, garden repairs and Marketing.
www.heritagefund.org.uk

Postcode Neighbourhood Trust is a grant-giving charity funded entirely by players of People’s Postcode Lottery.
Our organisation received £19,514 from the Trust to Enable us to reopen safely after Covid Closure & Marketing to help promote us.
www.postcodeneighbourhoodtrust.org.uk
www.postcodelottery.co.uk

Winter Opening
1st October – 29th February 9:00am – 5:00pm
(Closed on Christmas Day)
Summer Opening
1st March – 30th September 9:00am – 5:00pm
Last entry 15 minutes before close.
During inclement weather, please check our Facebook page to check that the Memorial Garden is open. The safety of our volunteers and visitors is important to us, and we will only open the garden everyone can get there safely.

Since re-opening after lockdown we are now governed by strict covid-safe measures. We currently only accept visitors on an appointment only basis. All members of the party must belong to the same extended household.

Please email bookings@abervalleyheritage.co.uk to book your visit.
Tuesday to Saturday
11:00am – 2:00pm
(excluding the Saturdays preceding Bank Holidays)
Last entry 15 minutes before close.
Admission is free of charge to everyone.

During inclement weather, please call Senghenydd Community Centre on 029 2083 0445 to check that the Museum is open prior to travelling. The safety of our volunteers and visitors is important to us, and we will only open the museum when everyone can get there safely.